While current trends show that automobile use is likely on the decline worldwide [1, 2, 3], the reality remains that parking lots like the one pictured above will be required in the short term to keep retail centres in car dependent neighborhoods viable. Although surface parking is contrary to many urbanist ideals, there are creative ways for developers and municipal urban planners to handle this necessary evil.

Based on the results of a study on the role parking plays in the success of urban shopping centres in Greater London, Eric Jaffe of the Atlantic Cities concluded four reasons why retailers don’t need parking to thrive:

Each retail market is unique and the surrounding density, land uses, and access will impact the quantity of parking required. Retail projects located in areas with high walkscores and decent public transit, like Greater London, may require less parking than what is required by the local municipality’s minimum parking ratio. On the other hand, higher parking ratios may need to be maintained for projects that are located in areas with low walk scores and poor transit accessibility.

2. Accommodate cyclists, pedestrians, and transit users by integrating the proposed retail project with its nearby surroundings

America’s newest and largest LEED Gold certified shopping center, Destiny USA, located in Syracuse, NY (Walkscore: 63), is a perfect example of how a retail developer with a semi-suburban site ensured that cyclists, pedestrians, and transit users were incorporated into its designs and connected with adjacent assets.

Pyramid Management Group realized the importance of Syracuse's Creekwalk, an existing pedestrian/cyclist greenway, in bringing customers who may walk or cycle to Destiny USA. To capitalize on this asset, they constructed a universally designed 300 foot pedestrian bridge that extends from the 2nd floor of the center to the trail’s entrance point on the Creekwalk Corridor.

Underground parking is expensive and can sometimes negate the benefits of constructing mixed-uses such as residential and office components (as in the case of Ivanhoe Cambridge’s project in Surrey, Canada). While this might be true for some cases, there has been a growing body of evidence [7, 8, 9] that suggests mixing uses generates synergy since each different use benefits from the other through the use of shared parking. 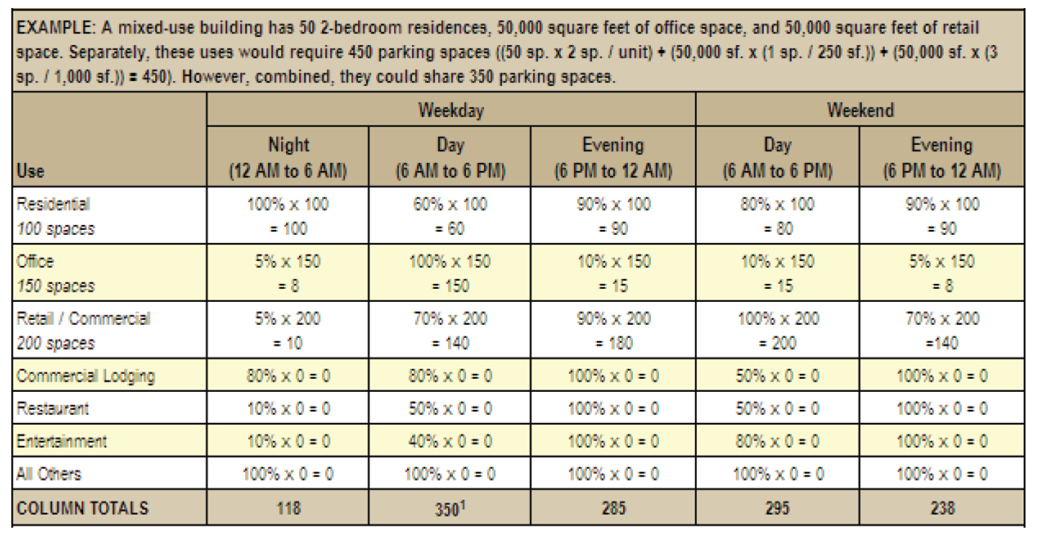 The example above illustrates how different uses have varying parking requirements throughout the day and how each use has their own peak time in which demand is extremely high. For example, office parking requirements during weekday evenings are only 10% of peak, while retail is 90%. Combining these two land uses and sharing parking allows less overall space to be built.

Will Macht, a blogger at the Urban Land Institute argues that multiblock underground shared parking can be one of the most important tools between developers and planners in order to create the highest density with the most optimal mixture of uses. According to Macht, this technique has the potential to “stimulate greater densities using lower parking ratios, by achieving more effective ones.” He points to the Brewery Blocks in downtown Portland (Walkscore: 98) to illustrate the opportunities of underground multiblock shared parking:

“underground shared parking garage stimulated the resurgence of retail uses is Portland’s Pearl District...shoppers to those venues know even if they cannot find a place outside their favorite location, they can certainly find a parking space at the Brewery Blocks.” 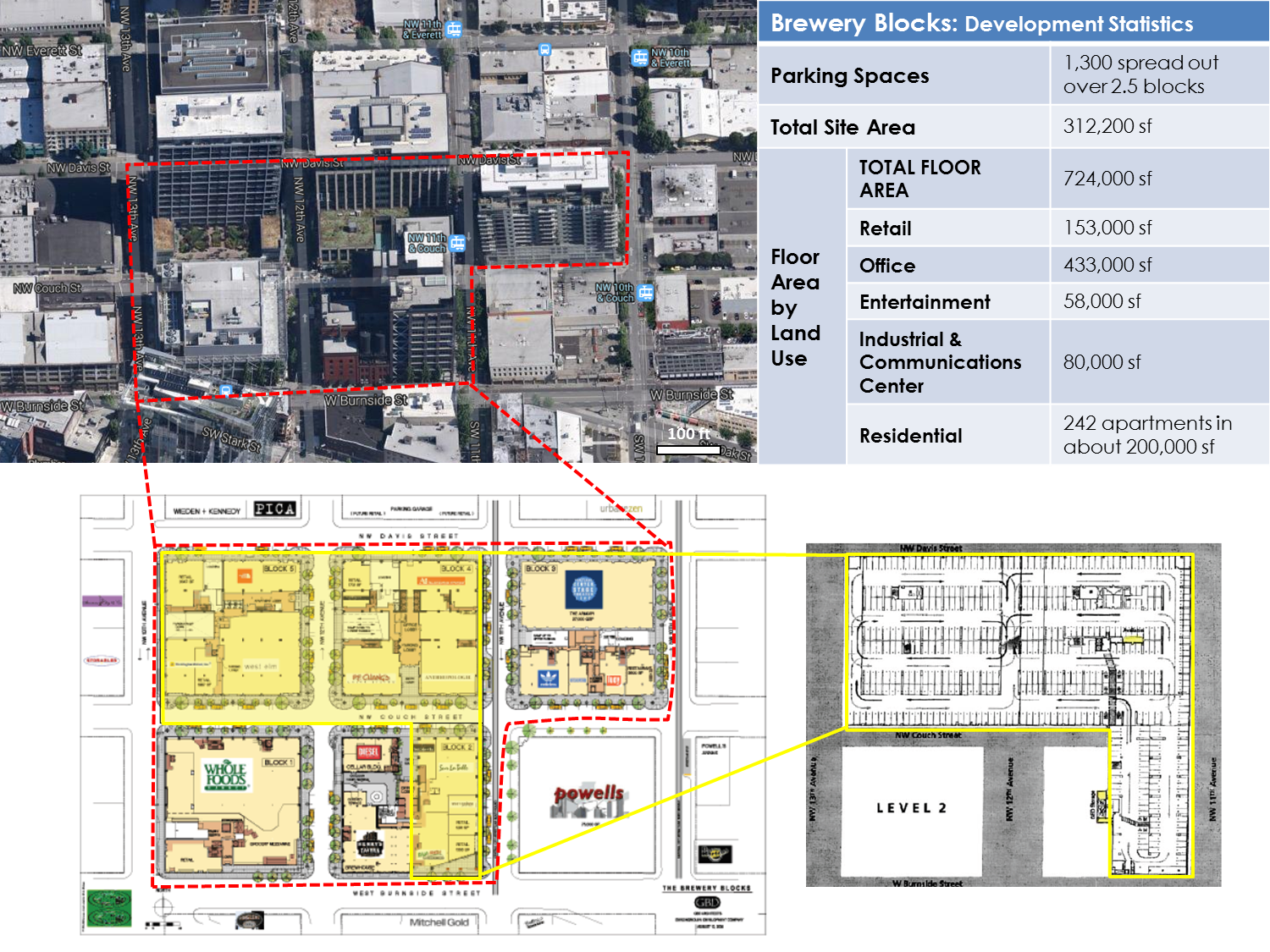 4. Hide parking in order to enhance the pedestrian experience

As mentioned above, underground parking is expensive and not feasible for all projects given their budget or location. In these cases, hiding parking behind active uses can be a healthy alternative to creating a vibrant, pedestrian-centric development.

Lansdowne Town Center in Virginia (Walkscore: 58) is a prime example of a suburban development that hides surface parking in order to create a pedestrian-centric retail experience. The lease plan pictured below shows major surface parking lots placed behind retail uses instead of placing parking between the street and active retail storefronts. Since parking is hidden behind active retail uses emphasis can be placed on placemaking elements that make a development a pleasant place to shop in by integrating resting places, food and beverage tenants that feature al fresco dining, and other significant public spaces. 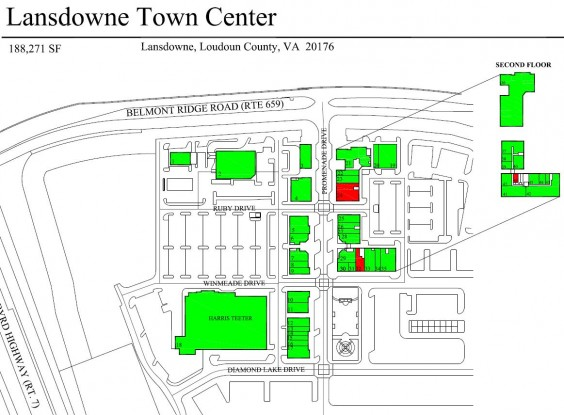 Another method of separating parking areas from active pedestrian areas can be seen in Highgate Village in Burnaby (Walkscore: 78) where parking was hidden by  wrapping retail uses around parking. While this method is more complex, it allows for denser development as illustrated below.

Even though parking can be seen as counter-intuitive to placemaking by planners, there are a number of progressive actions that can be taken to shift conversations with developers regarding parking in their projects:

Kaid Benfield from the NRDC compares neighborhoods that allow parking in the front versus those those that require parking to be placed behind buildings. His findings are clear - for walkability and neighborhood vibrancy, put buildings in front and parking in back.

While Benfield compares many examples, Carmel, Indiana, a suburb of Indianapolis is one of the most innovative examples of how a traditional, bedroom suburb that was once lined with surface parking lots and strip malls transformed into a walkable, pedestrian-centric environment that hides parking either behind buildings or underground.

Parking will inevitably remain a necessity for future retail developments with poor accessibility in the short term. However, it will be important for developers and urban planners to recognize the declining importance that automobiles will play in the lives of future consumers and think about designing projects with less of an emphasis on automobiles and more for people [10, 11].

According to The World Bank, the number of motor vehicles in OECD nations has been seeing slowing growth and even declining since 2007. It will be important for retail developers to recognize this declining trend and plan for the future.

« Sizing Open Spaces: How Wide is Too Wide?
Does the LCBO Help or Hurt Small Town Ontario Downtowns? »

Developers, investors and governments around the world are recognizing how retail offers enormous opportunities. Retail is the glue which holds communities, neighbourhoods and mixed use developments together.
Recent Articles
Rethinking retail’s role in animating streets and public spaces

For decades, planners, urban designers, and policy makers have advocated for street-facing ground floor retail space as a means of animating streets and public spaces. Retail was in many ways the optimal use for achieving this activation due to its foot traffic generation and visual diversity created by storefront designs, lighting, and window transparency. Many […]

Since the release of PokémonGo, there has been an influx of coverage in what many local business and retail centres are doing to capitalize on this increasingly popular game developed by Niantic and The Pokémon Company. The premise behind this game is to mimic the story and concept of the Pokémon franchise which is aptly […]

The Viability of Vertical Retail in Urban Environments

In the context of vertical shopping environments, a rule of thumb that is sometimes applied is that sales performance drops off by 50% for every floor above ground level. By the time you get to the third storey, you can expect only a fraction of the sales turnover. As a result the space is often not viable. When working […]

To meet the evolving needs of workers and visitors in the core of Cape Town, a new food concept has been pioneered under the “Food Lover’s Market” label. The modern eatery concept brings together the best of an urban grocery store and food court within one beautifully designed facility. Importantly, centralized point-of-sale tills allow visitors […]